Sumac is usually sold as a coarsely ground powder, perhaps called “powdered culinary sumac,” and can also be found in berry form. It can be found at Greek and Middle Eastern markets. 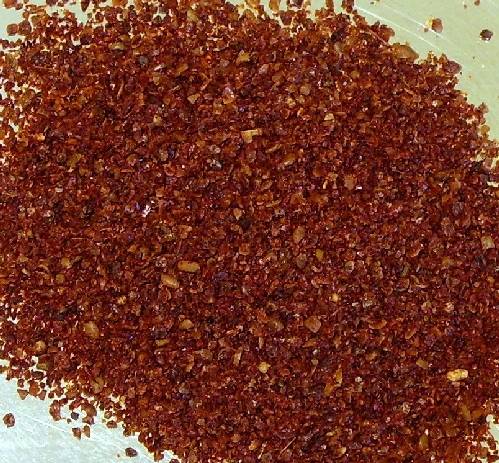 Sumac is a shrub which grows wild in the Mediterranean region, and this sumac is not toxic or poisonous. This non-poisonous variety also grows in other areas around the world and can be a colorful addition to home landscaping.Ground sumac is a dark red-burgundy color. As a dried berry, ground sumac has a nutty texture when used dry. It has a tart, sour lemon taste.

The use of sumac came to Greece from the Middle East where it is more widely used. In Greek cooking, sumac is used as a rub for grilled meats, and as a flavoring most notably on meats, in stews, and in pita wraps. It is also used in rice and vegetable dishes. Try adding a dash to the top of hummus for a new taste treat.

There’s no good substitute for the sour lemon taste of sumac, but just for color, paprika can be used.

The name sumac is derived from Aramaic “summaq” meaning “dark red.” The variety of sumac “Rhus coriaria” is sold as a spice for cooking, and has been used in cooking for millenia.2,000 years ago, the Greek physician Pedanius Dioscorides (c.40-90 AD) wrote in his voluminous “De Materia Medica” (“On Medical Matters”) about the healthful properties of sumac – primarily as a diuretic and anti-flatulant when it was “sprinkled among sauces” and mixed with meat. Dioscorides served in Roman Emperor Nero’s armies as physician, pharmacologist, and botanist.One practice of ancient Rome continues today in certain cuisines: sumac berries are boiled in water, drained, and pressed to extract their essential oils. The oil is then mixed with either olive oil or vinegar, depending on the type of condiment sauce being made. The sumac oil or sumac vinegar is then used much the same as current day vinegar and olive oil.