Savory is seldom available at the grocery market as a freshly cut herb. It is most often sold as dried leaves in disposable containers. Summer savory is easily grown in indoor herb gardens or outdoors in warm weather. 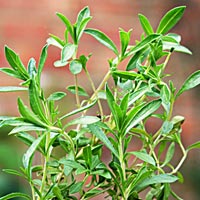 In the wild, savory looks a lot like Rosemary; even their blooms look similar. It grows to 14 inches and has a slender, erect stem with sparse bronze leaves. The pale pink flowers are approximately 0.35 inches in diameter. Dried savory leaves are bronze-brown in color.

Savory is a favorite with legumes, in marinades, and with white cheeses. Also use savory to enhance the flavor of fish, vegetables, eggs, soups and stews, and many other dishes. Fresh savory leaves are often used as a garnish. Vinegars are also flavored with savory. In the summer garden, planting savory with or close to beans will help deter bean beetles.

Thyme, or thyme with a pinch of sage or mint

Like many herbs and spices, savory is indigenous to Southern Europe and the Mediterranean region. Today, several varieties of both summer and winter savory are cultivated worldwide – summer savory for cooking, winter savory for herbal and medicinal extracts.

A subspecies of savory (satureja thybra) is named after the village Thybra which is close to ancient Troy. A flavored wine – thybritis wine – is made today in much the same way ancient Greeks made it – by placing savory in the funnel through which the wine must (pressed grape juice) is poured into the amphora or barrel.

Through the centuries, both summer and winter savory have been used to soothe stomach pains, curb flatulence, to promote the health of female reproductive system, and as an aphrodisiac.