Sage is available as fresh or dried leaves. Dried sage is usually available in either coarse ground or powder form. Buy fresh sage that is strongly scented. Refrigerate wrapped in a paper towel in a sealable plastic bag, to keep usable for up to four days. 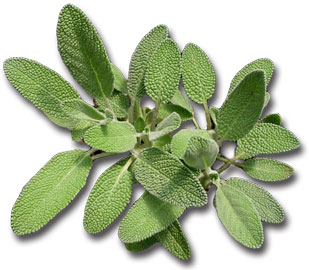 The sage plant is a round, low-growing evergreen shrub that grows to 36 inches in diameter. Its lance-shaped leaves are grayish-green and feel “downy” to the touch because of very short and fine hairs covering the leaves. The flowers are creamy-white to purple-pink and grow in whorls or rings in groups of 2 to 6 at the top of the central stem.

Sage has a strong flavor that is spicy and sharp, with a hint of camphor. Small amounts of sage leaves are often used in cooking meats and poultry, or in wreaths. Sage smoke can be used as a room deodorizer.

There are two sage varieties: broad-leaf and inrolled at the edges. Broad-leaf sage is mild in taste and is used for cooking. Sage has a slightly bitter and pungent taste and goes well with pork, duck, sausage, and bacon. On Crete, sage is often used in the process of smoking sausages, and while baking the traditional hard bread of Crete by inserting twigs of sage in the wood-fired oven.

Ancient Greek physicians, such as Dioscurides and Hippocrates, were familiar with the medicinal and therapeutic qualities and applications of sage. Hippocrates (4th century BCE) prescribed sage as a remedy for lung diseases and gynecological disorders. Dioscurides (1st centry AD) used sage as a diuretic, to stop external bleeding, and to promote menstrual discharge.

Folk medicine in many parts of the world consider sage a “cure all” medicine, and use it to treat a host of illnesses, such as respiratory infections, sore throats, and headaches. Desert nomads drink an herbal infusion (mostly sage) believing that doing so restricts the loss of fluids and prevents dehydration.

Medieval Europeans used sage to strengthen their memory and to promote wisdom. During the Middle Ages, sage was used extensively against cholera, high fever and epilepsy. During the Toulouse plague in 1690, it is said that thieves washed themselves in water strongly infused with sage and rosemary extract, to protect themselves from deadly infections while looting the dead lying in the streets.

The essential oil of sage contains thujone, borneol, and phenolic acids which are powerful antiseptics and antibacterials.