Saffron is sold in small packs of threads or in powdered form.

Dried saffron threads range from orange-red to yellow, are between 1″ – 1.5″ long, and are shaped like pieces of very thin and cooked pasta that have dried and slightly curled. The best saffron has an aroma similar to honey and a flavor compared to bitter honey. 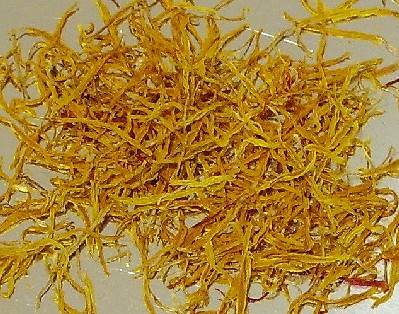 In Greek cooking, saffron is used in salads, sauces for potatoes and vegetables, rice, soups, and boiled fish dishes. It is well known in the Mediterranean cuisines. Only a small amount (a few threads) is needed to impart the color and aroma.

turmeric (use 4 times as much – for color only), or food coloring

In Greek mythology, the mortal Crocos fell in love with the nymph Smilax. Smilax rejected his amorous advances and turned him into a beautiful purple crocus flower.Though imported primarily from Spain, Saffron is also cultivated in England, India, Turkey, China and Iran.In India, saffron’s color is considered the epitome of beauty – it is the official color of Buddhist robes.

The name saffron comes from the Arabic word for saffron – “za’fran” – meaning “to be or to become yellow.”