Every autumn after grape harvest, various wine festivities begin throughout Greece. A few days later, in Thessaly, Epirus, Macedonia and on the island of Crete the “Celebration of Tsipouro” takes place. 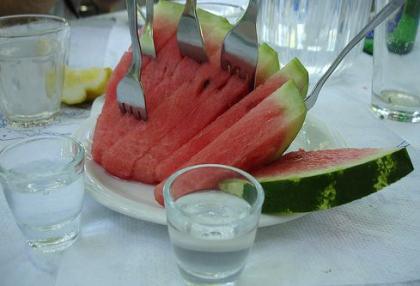 Tsipouro is a strong distilled spirit containing approximately 37 per cent alcohol per volume and is produced from the must-residue of the wine-press. The name tsipouro is used throughout the country, except for Crete, where the same spirit with a stronger aroma is known as tsikoudia. Also the Oriental name raki is used, from which the term “rakizio” is derived, used to refer to the drink’s distillation process, which usually turns into a huge celebration among family, friends and neighbours.

Turkish raki, its traditional drink, is not the same drink as the Cretan one. In Turkey raki was first produced from the residue of grapes left over from wine making only. When a shortage of residue started, spirits from abroad were imported and processed with aniseed.

In the near and middle east countries the drink is known by different names such as Araka, Araki, Ariki which obviously come from the same origin. Some claim that it is called Iraqi (from Iraq) because it was first made in this country and spread to other regions. Others say it got its name from the razaki grapes used in producing it. Both theories are acceptable. Another theory is that arak in Arabic means “sweat” and araki “that which makes one sweat.” If one drinks too much raki one does sweat sometimes and when raki is being distilled it falls drop by drop like sweat, so the name could have come from Arabic.

During the Turkish occupation of Crete the name raki was given to the local tsikoudia, since there were some similarities. Now both names are used in Crete equally. The Turkish raki has a history going back 300 years. But it all started much longer ago: famous coppersmiths from Armenia and the Pont, who made nice decorated distilling vessels, confirmed the deep knowledge of distillation in all the Byzantine empire.

History even goes further back. The dietary habits of the ancient Minoans and the Myceneans were apparently in conflict with the contemporary Mediterranean diet, according to research conducted by scientists from Greece, Britain, Italy and the United States. Examination of organic residue on ancient pottery shows that the Minoan and Mycenean diet was mainly based on meats and greens, while fish was on the bottom of their culinary preferences. In addition, tsikoudia was a favourite drink with their meals.

Greek Coffees,Teas,Spirits and Other Drinks

Ouzo – More than a Greek drink, it’s a Greek philosophy