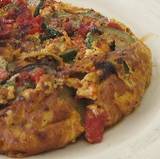 Meeting fabulous Greek cooks is always a delight, and if they’re “of a certain age,” at least a few will make it a point to tell how, when their children were young, they gave them a boiled egg every morning. This is said with a great deal of pride – as it should be – since eggs have not always been easy to come by. Providing an egg a day for their children – in addition to eggs used in daily cooking – was often expensive, and for some, put a burden on the family budget.

Farmers raising laying chickens certainly had more access, but getting the eggs to market was an important part of family finances. Eating all the potential profits wasn’t an option.

For others who kept one or two chickens, eggs were still not seen as a main ingredient, and for others still, who had to buy eggs, eggs were used to make bigger meals and baked goods.

Omelets and scrambles – built to showcase vegetables and cheeses, leftovers (even leftover pasta) – are delicious and filling, but often very different for those who have become accustomed to omelets and scrambles made with plenty of eggs – sometimes even with just eggs and some herbs and seasonings.

Today, Greek country omelets and scrambles show off the tastes of cheeses, tomatoes, zucchini, artichokes, potatoes, and other vegetables that are plentiful in the Greek diet. A minimum number of eggs serve to bind ingredients together, and to non-Greeks, this frugal use of eggs can be surprising. Rarely, if ever, will a traditional Greek egg dish contain more than one egg per person.

There are, however, exceptions to the frugal use of eggs elsewhere in the Greek diet – even in the most traditional of Greek homes. At Easter, the most sacred observance in the Greek Orthodox faith, all stops are pulled out and red eggs are made in great quantities. The egg-rich Easter bread (Tsoureki) is also a tradition.

Because traditional Greek omelets and scrambles are stuffed to overflowing with vegetables, their place in the Greek menu is as a side dish, snack, or meze (they go well with light white wines or beer), rather than as a main dish.

In your menu, try these fabulous omelets and scrambles as brunch dishes, or as the central piece in a light meal.