Cinnamon is available in powdered and stick (quill) form (sticks are usually 2- to 6-inch long sections of dried bark). The essential oil of cinnamon is sometimes available. 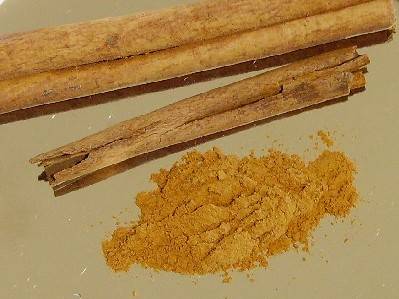 Ground cinnamon has a tan color. Quills, made from dried cork-like outer tree bark, are tan to mottled light brown in color, usually between 2 and 6 inches long and from 1/2 to 3/4 inches in diameter.

Ancient Egyptians cherished cinnamon as one of the principle embalming spices. Of course, these ancients were astute to the culinary pleasures of this spice and developed foods flavored with cinnamon, perhaps influenced by suggestions made by their trading partners.Medicinaly, cinnamon was known to ancient pharmacists and doctors as an aid in promoting circulatory health. An article at NewScientist.com about an accidental discovery made by the U.S. Department of Agriculture’s Human Nutrition Research Center states that “just half a teaspoon of cinnamon a day significantly reduces blood sugar levels in diabetics.”
Tweet