Greek salad, or horiatiki salata, is a rough country salad of juicy tomatoes, crisp cucumber, sliced red onion, green pepper, crumbly feta cheese and plump kalamata olives. Greek salad can be served as a side dish or as a light meal with some crusty bread. 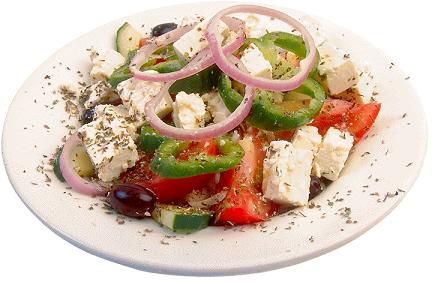 Combine vegetables, olives, and parsley in a large bowl. Rest sliced feta on the top of salad. Combine oil, vinegar, and oregano in a small plastic container with a lid. Shake vigorously to combine oil and vinegar and pour over salad and cheese. Season with salt and pepper and let the salad marinate until ready to serve. Serve salad with pita bread blistered and warmed on a hot griddle or grill pan.