Tarragon is sold fresh and dried.

Fresh (French) tarragon leaves are bright green and approximately 1″ long and 1/4″-1/2″ wide. The leaves have a tendency to curl when dried. This 2-3 foot perennial has light golden ball-shaped flowers, approximately 1/2″ in diameter, in clusters of 2 or 3 flowers. 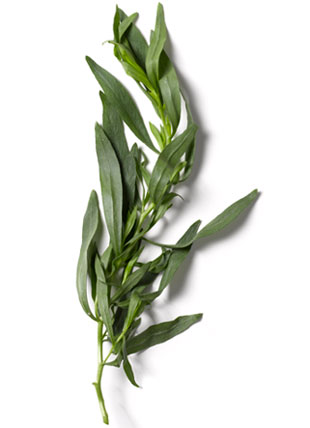 A great herb for flavoring vinegar and mustard, tarragon is used in omelets, with mushrooms, and grilled chicken.

The name “tarragon” is a corruption of either the French word estragon or the Arabic word “tarkhum” – each mean “little dragon.” It was used by ancient Greeks for its medicinal properties.

The most widely used variety of tarragon comes from France. The French generic name for tarragon (Artemisia) stems from the Greek “Artemis” – goddess of the moon – due to the soft, silvery color of its leaves, as if they are bathed in “moon beams.”

Ancient Greeks used tarragon to ameliorate tooth ache. During the Middle Ages, one school of medical thought believed that tarragon was a cure for snake bites due to its serpentine shaped roots; an opposing group believed that the root shape resembled dragons – note the use of dracunculus (dragon) in its latin name – and that tarragon was a cure for bites from venomous beasts.

The French call tarragon the “King of Herbs” and base many of their sauces – such as béarnaise and ravigote – on the use of tarragon as the major flavoring agent.