The name comes from the Italian brodeto, for “broth,” a legacy of Corfu’s Venetian past. A similar dish, at least in name, is the bourieto of the northern Peloponnesos, where it refers to a fish stew redolen  with onions but not colored with paprika or tomato paste. On Corfu, bourtheto is one of the island’s four signature dishes. Before tomatoes entered the island’s larder, bourtheto used to get its deep reddish brown color from a combination of paprika and cayenne, which still appear in the recipe. As for the fish itself, any firm, white-fleshed fish can be used for this recipe. The most beloved on the island is the local scorpina—the scorpionfish. Its drawback are its many bones, which make it difficult to eat, but this deep-water rockfish is one of the premier soup and stewing fish in Greece because it is so tasty. Another favorite fish for this recipe is grouper. There are other variations, too. Octopus bourtheto, for example, is a common menu item in Corfu’s many taverns. Fresh cod is also much used and, in fact, makes for one of the island’s standard
Sunday lunch dishes. 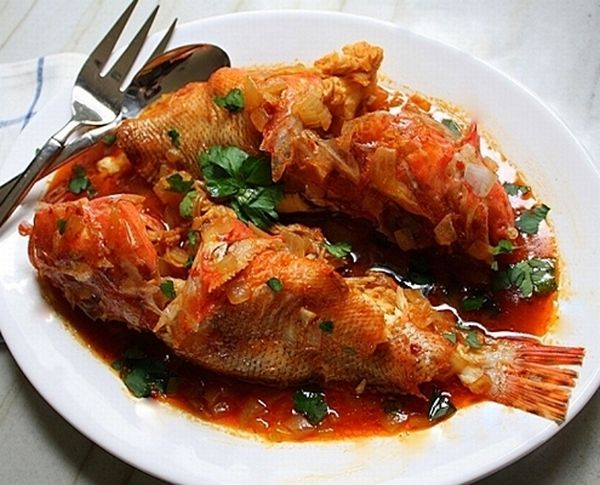 1. Season the fish with salt and pepper and place in the refrigerator until ready to use.

2. Heat the olive oil in a large, heavy skillet, addthe leek and garlic, and sweat over low heat until the leek is very soft, about 20 minutes. Add the paprika and cayenne and with a wooden spoon for about a minute. Add the tomato paste and stir for another minute. Pour in 1/2 cup of the wine and the water. Bring to a gentle boil, reduce the heat to low, and simmer, covered, until the sauce is thick and dark, about 15 minutes. Season with salt and pepper.

3. Place the fish over the leeks in the skillet. Add the remaining 1?2 cup wine, cover the skillet, and simmer until the fish is flaky and tender, another 15 minutes or so, depending on the size of the fish. Remove from the heat, let stand for about 5 minutes, and serve.

Octopus Casserole (Htapothi Bourtheto): Substitute one 3-pound cleaned octopus for the fish and 2 cups finely chopped onions for the leek. In a separate pot with a heavy bottom, place the whole cleaned octopus and 2 tablespoons olive oil. Cover the pot and cook over very low heat until the octopus is bright pink and has exuded its juices, about 30 minutes. Remove, let cool slightly, and cut into serving pieces. Reserve all the juices. In the same pot, heat 2 more tablespoons olive oil and cook the onions and garlic, stirring, over medium heat until soft, about 5 minutes. Add the paprika and cayenne, hen add the tomato paste and wine. Place the octopus in the pot, pour in any remaining juices, cover, and simmer until the octopus is very tender and the sauce thick, another 45 to 50 minutes.

Fish in a Spicy Red Sauce from Corfu – Bourtheto