Bundles of freshly cut parsley or disposable containers of dried parsley leaves and dried parsley seeds are available at the market. Fresh is always preferable since dried parsley quickly loses taste and aroma. 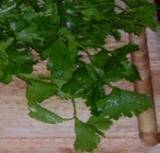 Parsley has a light, fresh scent and flavor. It contains antioxidants and vitamins B1, B2, niacin, A, and C. It contains 24 times as much vitamin C as lettuce and 100 times more vitamin A as cabbage. It takes 12 pounds of fresh parsley to make one pound of dried parsley.

Parsley adds flavor and taste to a diverse range of foods, such as soups, salads, meat, fish, omelets, and legumes. Greeks also use parsley almost like a vegetable, adding it in great quantities to soups and stews.

Parsley originated in the Mediterranean area, possibly Sardinia, and has been cultivated from circa 3rd century BCE. It is cultivated in most parts of the world.Medicinally, parsley extracts are used to treat respiratory infections and conditions of the skin and eyes. Pedanius Dioscorides, the ancient Greek physician, pharmacologist and botanist believed parsley seeds to be diuretic, facilitating the start of menstruation, and an aid in relieving discomforts of the stomach and abdomen.Ancient Romans placed necklaces of parsley around their necks, believing it absorbed sweat and body odors. Medieval Europeans thought they could kill someone by saying the person’s name while plucking a sprig of parsley.

The Greeks have a saying “Just like parsley,” referring to someone who appears everywhere, but without a significant role.