More than a Greek drink, it’s a Greek philosophy

My first experience with ouzo or oyzo was not in Greece. A friend of mine had a taste for it and proudly introduced me to ouzo over ice, demonstrating its ability to turn cloudy with the cold.

I was the next thing to turn cloudy, but not with cold. It filled my veins with white fire. Ouzo is a potent beverage, with an anise or licorice-like flavor. To call it a Greek “white lightning” is too simple – ouzo is a complex drink. 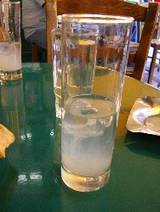 A simple glass of ouzo at an ouzeria in Greece.

Ouzo is often consumed with savory snacks, especially small salty fish. In less-touristy places, small plates of these will arrive at no extra charge along with your ouzo.

While total agreement is not possible, many people prefer the ouzo produced on Lesbos, and one of the better-known brands is Epom. Lesvos resident Matt Barrett is one who agrees that Lesbos ouzo is best, and recounts some of his experiences of Lesbian ouzo.

Women have always played a part in the production of ouzo. In 1910, an enterprising widow named Heleni Giokarini brought out a brand called “Widow’s Ouzo”, which, renamed, is one of four varieties still being produced today by the Giokarini company on Samos.

Though usually enjoyed alone, ouzo can be part of a mixed drink. Here’s a recipe for Mussaka-NOT to be confused with moussaka. How about a Zorbatini? Or the aptly-named Greek Lightning, a blend of ouzo, vodka, and creme de Cassis.

Ouzo can also be used in cooking, especially as a marinade for appetizers but it can also impart its flavor to entrees.

As a clear, potent alcohol, ouzo is sometimes confused with tsipouro or tsikoudia, but those are generally made by private householders and will vary from batch to batch.