Learn the secrets Greek fishermen have known for centuries.
For a sweet, tender, melt in your mouth taste, you must first treat or tenderise octopus before cooking it.

In order to obtain a soft, creamy, tender octapodi, you do need to tenderise octopus.

The Greeks, being a nation of fishermen, have always known that you must treat the oktapodi before cooking it and perfected the best method of how to attain this. 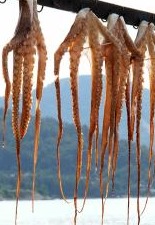 It is also the best way to learn how to clean an octapodi, as it gets rid of the slime! Once you tenderise it, you can use it in any of your favorite seafood recipes.

This is the Greek method to tenderise octopus!

By beating the octopus you tenderise the muscle and then by swirling it you remove all the slimy stuff from it.

Traditionally it was beaten on a rock, there’s plenty of them around near the sea in Greece – but a rock or a hard place – it doesn’t make any difference!

Although these actions may seem a lot of work, you will have a beautiful, tender octapodi, in whichever method you use to cook it.

I do not think you can use this method for baby octopus. This method is mostly used on large ones.

It is now ready to be used in any recipe such as this grilled marinated octopus recipe.

A little bit of oktapodi information for you.