Hot peppers are available in a variety of forms – fresh, dried, coarsely ground, flaked, and powdered. They come in a range of colors and sizes. 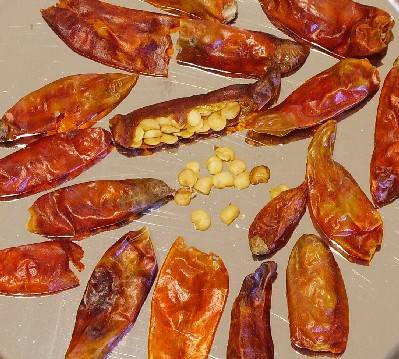 The size, shape and color of hot peppers depends upon the variety and maturity when used. Chiltepin peppers native to Mexico and the southwest U.S. are round berry shaped and bright red, 3/8″ long. Habanero peppers, either light green, orange, or deep red at maturity, are round and squat with a slightly pointed end, 1½ to 4″ long. Serrano peppers (Capsicum annum) are green, red, purple, 1½ to 3″ long.

Hot chili peppers (μπούκοβο, boukovo, say: BOO-koh-voh) are cultivated in the Greek province of Macedonia and in the Eptanisa island group in the Ionian Sea, where they are used liberally as seasonings, most notably in stews and sausages.

Other varieties of hot peppers are grown throughout Greece.

Originating in the Americas, cayenne pepper has been used for several millenia as a food, a condiment, and a medicine by natives of Mexico and South America. Doctor Chanca, Christopher Columbus’s fleet doctor, wrote about the use of cayenne as a medicine, circa 1492. As part of the precious and exotic cargo on Columbus’s returning ships, hot peppers (cayenne) were first introduced to Europe’s medical establishment of the 15th and 16th centuries, several years prior to its culinary use in Europe. By the 19th century, cayenne was a well known and established medicinal herb in 19th century apothecaries, in the USA and in Europe.

Doctor John R. Christopher, the father of American herbology, attests to the medical value of cayenne, based upon more than 35 years practice of natural (in part, herbal) healing: “I have seen it used so many times over the years with such success, that I feel that it is one of our great herbs. In 35 years of practice, and working with the people and teaching, I have never on house calls lost one heart attack patient and the reason is, whenever I go — if they are still breathing — I pour down them one cup of cayenne tea (a teaspoon of cayenne in a cup of hot water), and within minutes they are up and around. This is one of the fastest acting aids we could ever give the heart, because it feeds the heart muscle immediately.”