It’s a classic image that comes to mind when many think of Greece: sitting under an umbrella by the seaside, with ouzo or wine and a plate of freshly grilled octopus. It’s delicious, and you can create the same atmosphere at home. 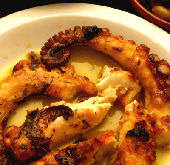 A note about octopus: Octopus loses a lot of its volume during cooking, so expect that the finished dish will look like quite a bit less than the original quantity.

If the octopus has not been cleaned: Under running water, remove and discard the ink sac, stomach, and eyes from the large head cavity. Remove the beak, at the bottom of the head where it joins the tentacles, with a sharp knife. (Squeamish? Wear rubber gloves.)

Place the whole octopus in a pot with enough boiling water to to cover generously. When it resumes boiling, cook for 10 minutes. Remove from heat, and drain. When cool enough to handle, rub the octopus with your hands under running water to remove the dark outer membrane. This comes off fairly easily, and if it doesn’t all come off, that’s all right.

Place the octopus in the pressure cooker with enough water to cover. Bring to a boil, seal, and when pressure is reached, lower the heat and cook for 10 minutes. Use quick pressure release, remove the octopus and drain.

When the octopus is cool enough to handle, cut off the tentacles, and cut the head sac into 1/2 inch strips. Brush with olive oil (or brush the grill) and grill over low coals for about 45 minutes to 1 hour (test for tenderness).

Just before serving, cut tentacles into 3/4 to 1 inch pieces (on a diagonal), and make the sauce: whip the oil and lemon juice or vinegar in the blender until it thickens (a few seconds). Pour over the octopus, sprinkle with oregano, and serve.

Another taste: Serve grilled octopus with slices of lime.