Fresh ginger root is usually available at the green grocer. Dried ginger is usually sold in powder form, and minced or pureed ginger can often be found in jars. 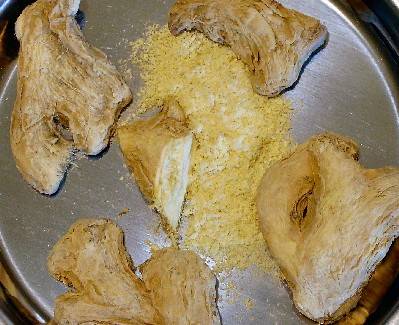 Ginger root is said to resemble fat stubby hands. They are a light tan color and are irregular in shape. Ground or powdered ginger is also light tan to a subtle yellow in color. Ginger plants are creeping perennials which grow 1 to 3 feet tall, with bright green and lance-shaped leaves 6 to 8 inches long which enclose conical clusters of small yellow-green flowers that are modestly speckled purple.

Ginger is used in fish marinades, cakes and cookies, and white sauces. It has also been used for centuries for perceived medicinal benefits.

There’s really no substitute for fresh ginger other than powdered. For 1 tablespoon of fresh grated, use 1/8 teaspoon of ground.

As early as the 12th century BCE, Shang dynasty rulers in China took care to locate the areas in the Sichuan region where the finest ginger grew so that their kitchens, their spice trade, might profit from the very best ginger.It is mentioned in the writings of Confucius, his Analects, as a staple in prepared medicines and in his diet.

The Koran regards ginger as a spiritual and heavenly beverage served at feasts in Paradise. Ginger is also mentioned in the Talmud and the Bible.

Via Arab traders, ginger was introduced into India and southern Europe centuries prior to the Roman Empire.

In the writings of Greek physician Pedanius Dioscorides (circa 40-90 ACE), his De Materia Medica, ginger is listed as an antidote to poisoning and as a digestive.

Many of the recipes in cook books from the Middle Ages list ginger as an ingredient. King Henry VIII believed ginger to be an aphrodiasiac and it was rumored that he consumed large quantities frequently.

Ancient Greeks ate ginger simply because they thought it good for them.