Feta is a white cheese and is the most consumed cheese in Greece. It’s also the most widely exported Greek cheese. And feta cheese is exclusively Greek. In 2005, after sixteen years of hot debate, the European Union’s highest court decreed that “feta” is protected as a traditional Greek product, and that none of the other EU member nations can use the name. 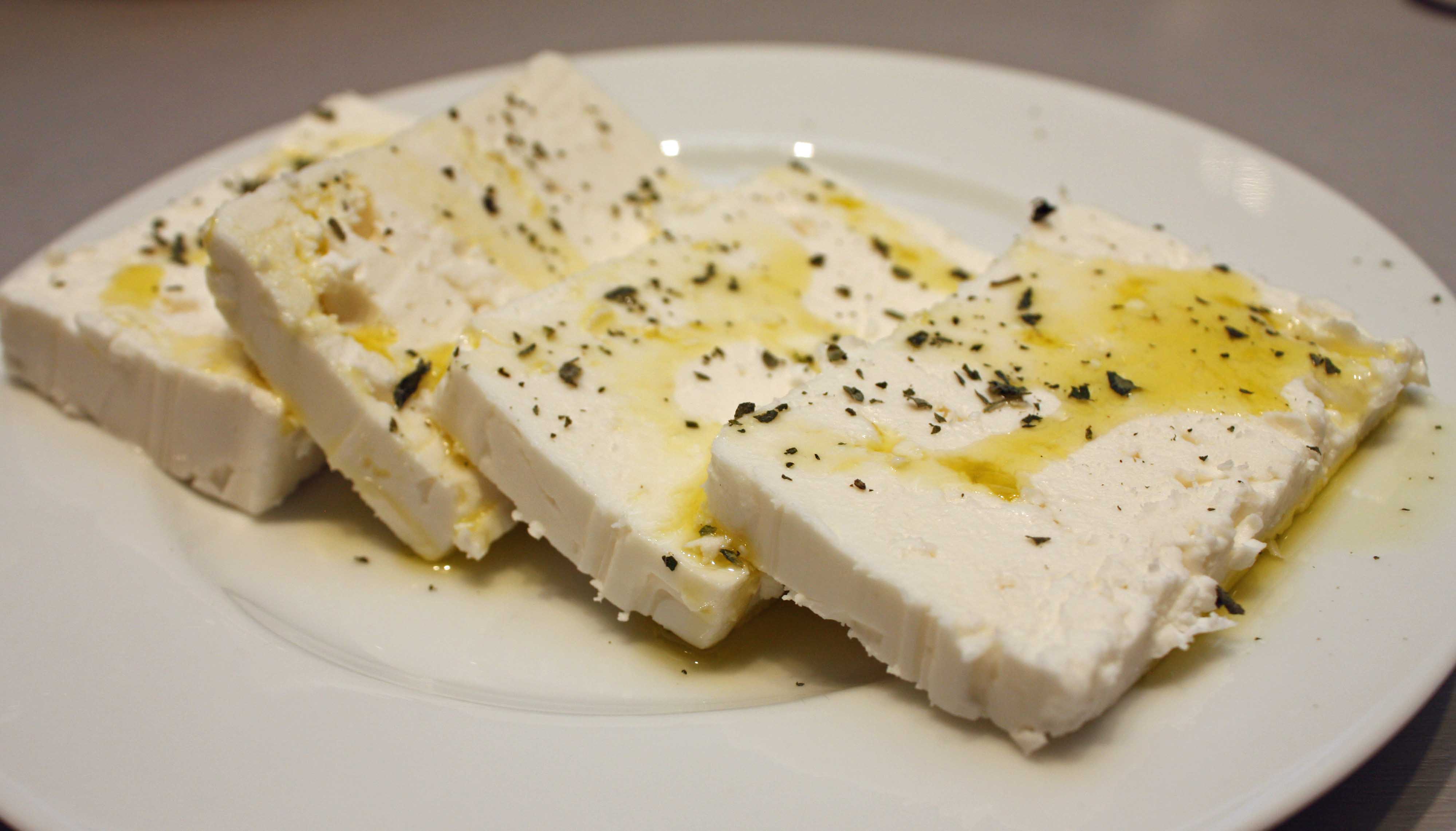 Feta is a salted curd cheese made from either sheep’s milk, goat’s milk, or a blend. It is sold in many degrees of firmness, ranging from soft and crumbly to fairly hard. Its flavor varies from mild to sharp. Because it is cured (from a week to several months) and stored in its own salty whey or water brine, feta is often referred to as a “pickled cheese.”

Feta does not have a rind or outer hard layer and is usually pressed into square or rectagular blocks. It dries out and sours quickly when removed from its brine; for that reason, blocks of packaged feta cheese are covered with brine, and should be stored, refrigerated, in the brine until used. Feta is available in most supermarkets as a solid block packed in brine, or crumbled.

The milk fat content of feta ranges from 45 to 60 percent. Typically, the nutritional values for one ounce of feta cheese are:

Feta is used as an appetizer, side dish, and as an ingredient in salads, filled pies, and pastries. Its use in preparing and serving Greek food is almost as imperative as the use of olive oil. Feta may be used in most recipes that call for cheese: vegetable and fruit salads, filled pies, as a topping for or ingredient in cooked rice and tomato-based pastas, as a filling for omelets, in sandwiches, and elsewhere.

Two of my favorite uses for feta:

Feta is not a “melting” cheese. It is widely used in cooked dishes and, while it softens, it retains much of its original shape – a delightful quality when you want taste as well as texture in dishes such asBaked Eggplant with Feta and Spinach, Bean & Feta Casserole.

Feta has been a favorite cheese in Greece for many centuries. Homer’s “Odyssey” contains several references to cheese which may have been feta cheese. In Greek mythology, the Cyclops Polyphemus was perhaps the first feta cheese manufacturer: carrying the milk that he collected from his sheep in animal-skin bags, he discovered that, days later, the milk had become a solid, savory, and preservable mass – the first feta cheese? Another tale from Greek mythology credits Aristaeus, son of Apollo and Cyrene, with its discovery.

Clifford A. Wright, a writer and cook specializing in the regional cuisines of the Mediterranean and Italy, suggests that the word “feta” may be of ancient Italian origin. Wright says, “the word feta does not exist in classical Greek; it is a New Greek word, originally tyripheta, or ‘cheese slice,’ the word feta coming from the Italian word fette, meaning a slice of food.”

On your next visit to the grocery store, make sure to bring home the feta!