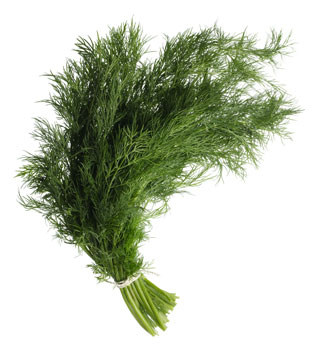 The dill plant grows to a height of 8-30 inches. The leaves are feathery and fernlike. The plant is a dark sea green color, with yellow flowers. The light brown seeds are about 3.5 mm (0.15 in) long, with a winged and oval shape. One side of the seed is flat, with two ridges; the other side, is convex with three ridges and three oil channels.
Dill has a bouquet that is aromatic and somewhat sweet, and a flavor that is aromatic and slightly bitter, similar to caraway. It is not a “hot” herb, like red chili peppers; rather, dill provides a delicate taste sensation.

Dill is used in cooking and bread making – the green parts as well as the seeds, although they are not substitutes for each other. Dill is a very good match with cucumber, and egg-lemon sauce. It is especially good with salmon, in combination with lemon juice. Add chopped dill to romaine salads, use liberally in fricassee dishes, and in fish marinades.

Dill may be found as an ingredient in recipes for pickles, fish, meat, salads, soups, cheese, omelets, vegetables and legumes, as well as a flavoring for olive oil and vinegar.

Drinking dill tea is recommended for those suffering from insomnia.

Dill loses its flavor quickly in cooking and should be added at the last minute.

Dill originally came from Southeast Asia and India, although some herbalists assign its word origin to the Norse “dilla”, meaning “to lull.” According to Dioscurides, ancient Greeks used dill to flavor wine and in the preparation of the “anethinon myron” and the “anthinon wine”. Ancient Greek and Roman soldiers used dill as a medicinal herb, by placing burned dill seeds on their wounds to promote healing. In Medieval Europe, dill could not be grown fast enough to satisfy consumer demand for its uses in love potions, for casting spells and for protection against witchcraft. Carrying a bag of dried dill over the heart was considered protection
Tweet