Codfish pies are found throughout the Ionian Islands. The Ithacan version includes both rice and cubed potatoes, testimony to the fact that this originated as poor man’s food, a dish that needed to be as filling as possible. Cod pie is a classic Lenten dish not only in Ithaca but in Cephalonia and in Corfu too, where it is also sometimes made with a batter crust, not with the more bread-textured homemade phyllo. 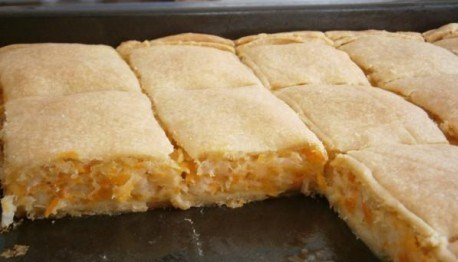 2. Bring 2 to 3 inches of water to a boil in a large skillet or saucepan, add the cod, reduce the heat to medium-low, and poach the cod just until it becomes slightly pearly, about 5 minutes. Drain, reserving the water. Shred the cod.

3. Heat the olive oil in a skillet and cook the onion over medium-low heat until wilted, 5 to 7 minutes.

4. In a large bowl, combine the cod, onion, rice, potatoes, tomatoes, garlic, parsley, and pepper. Taste the filling before adding salt, since the cod is
naturally salty.

5. Preheat the oven to 375°F. Oil a 15-inch round or square pan that is about 2 inches deep. Divide the phyllo into 4 balls. Lightly flour a work surface and roll out the first ball into a circle slightly larger than the pan. Place it in the pan and brush it generously with olive oil. Do the same with the next ball. Spread the filling evenly over the phyllo and pour in 1/2 cup of the reserved poaching liquid. Roll out the remaining 2 balls of phyllo and cover the pie with them, brushing each with oil. Trim the top and bottom edges if necessary and fold them in decoratively to create a rim. Make several incisions in the top of the pie and bake until golden brown, about 50 minutes. Let cool for at least 30 minutes but preferably 40 to 45 minutes before cutting. Serve warm or at room temperature.

Pumpkin and Carrot Pie from Cephalonia

Shrimp and Curry Pilaf from Ithaca

Pilaf with a Head of Garlic from Ithaca

Hortopitakia: Savory Turnovers with Spinach or Greens and Herbs