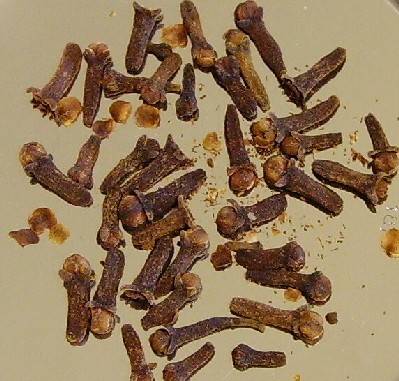 Cloves are the dried unopened flower buds of an evergreen tree native to Indonesia and Madagascar. A dried clove (bud) is 1/2 to 3/4 inch long, is shaped like a nail, and is rusty brown in color. Often a round, tan or dark gold, flower bulb is found at the tip of the bud. Cloves have a peppery, aromatic, unique taste,

In Greek cooking, cloves are mainly used in sweets, cakes, stewed fruits and preserves, in sauces, and in cooking pork where the cloves are inserted into the meat.

Allspice (for ground cloves only)

The Indonesian island of Ternate appears to be the traditional or historical origin for the production and trade of clove spice. Today, most of the world’s cloves are produced in Guiana, Brazil, the West Indies, and Zanzibar.The clove trade between Ternate and China goes back at least 2500 years. Ancient Chinese used cloves in cooking, in the preparation of medicines, and as a deodorizing breath “mint” – anyone wishing to speak with the Emperor (e.g., 3rd century B.C.E., Han Dynasty) first had to chew cloves to prevent any undesired bad breath.

For the last two thousand years, a succession of nations and cultures have attempted to monopolize the spice trade – which includes cloves. Arabs in the Middle Ages, Spain and Portugal in the 14th and 15th centuries, the Dutch in the 17th century. Thanks in large measure to efforts by French and English explorers and traders, cloves are now cultivated in several areas of the world – effectively eliminating a monopoly in the trade of this and many other spices.