If you are bored with the same old chicken recipes, then you need to try

Kotopita (koh-TOH-pee-tah). This is a savory pie made with a moist and flavorful chicken filling topped with flaky phyllo dough sheets and baked to a lovely golden brown. 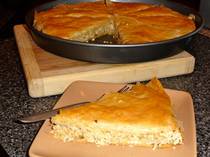 You can serve this as a lunch or dinner entree in larger wedges, or make smaller phyllo triangles and serve as an appetizer or snack.

Heat the olive oil in a large saute pan. Add the onions and leeks and saute over medium high heat until the onions are translucent and the leeks are tender, about 10 minutes. Add the cinnamon, nutmeg, rice, mint, and raisins and stir. Remove from heat and allow the mixture to cool slightly.

To a large mixing bowl, add shredded chicken, eggs, and grated cheese. Mix until well combined. Stir in the onion and leek mixture and mix well. Season to taste with salt and freshly ground black pepper.

Preheat the oven to 350 degrees.

Lightly grease a 16 inch round or 9 x 13 rectangular pan. Layer half the phyllo sheets in the bottom of the pan making sure to brush each sheet with the butter/olive oil mixture.

Add the chicken filling and then top with remaining phyllo sheets. Bake in a 350 degree oven for approximately 40 minutes or until phyllo is a nice golden brown color. This pita can also be assembled and frozen for later use.

Chicken Smothered with Onions and Feta from the Barthounohoria (Peloponnesos)