This recipe for Artichoke Pie or Aginaropita (ah-gee-nah-ROH-peetah) is a traditional favorite of the beautiful island of Kefalonia in the Ionian Sea.

You can make a full pan of the pita or use the filling to make individual finger-friendly phyllo triangles.Enjoy this recipe on its own as a light meal or pair it with an entrée as a side dish. 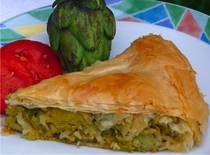 If artichokes are out of season or not readily available, you can easily substitute frozen or canned artichokes in the recipe.

The artichokes will need to be parboiled before chopping. Baby artichokes are delicate so I don’t remove the coarse outer leaves before boiling them. I simply trim the spiky tips with a sharp knife and boil them as is.

Boil the artichokes in salted water for 10 – 15 minutes until they are nicely tender. If you can pierce the stem easily with a knife they are done. Rinse and cool and then remove the tough outer leaves.

Chop the artichoke hearts and set aside. Heat the olive oil in a large skillet over medium high heat. Add the green onions and chopped leek until tender, about 5 – 7 minutes. Add the chopped artichokes, dill, lemon juice, and uncooked rice.

Season the mixture with salt and freshly ground black pepper. Add the broth and allow it to simmer for a minute or two. Remove from heat and allow to cool slightly.

When the mixture has cooled, stir in the cheeses and adjust salt and pepper if necessary.

Combine the melted butter with the 1/4 cup olive oil. Lightly grease the bottom and sides of a 9 x 12 rectangular or similarly sized round pan.

Preheat the oven to 350 degrees.

Carefully remove the phyllo roll from the plastic sleeve. Most packages come in 12 x 18 inch sheets when opened fully. Using a scissor or sharp knife, cut the sheets in half to make two stacks of 9×12 inch sheets.

You will only need 16 sheets of phyllo for this recipe so you can repackage the remainder and save in the refrigerator for later use.

Layer 6 sheets vertically in the bottom of the pan making sure to brush each sheet completely with the butter/olive oil mixture. Lay the next two sheets horizontally with half of the sheet in the pan and half overlapping to the outside. Add the artichoke mixture in an even layer and press with a spatula to flatten. Fold the phyllo sheets in to cover the filling and brush with oil/butter mixture.

Layer another 8 sheets on top of the spinach mixture making sure to brush well with oil/butter mixture. Tuck any unruly edges into the sides of the pan with the tip of your brush.

Before baking, score the top layer of phyllo (making sure not to puncture filling layer) to enable easier cutting of pieces later.

You can place the pan in the freezer briefly to harden the top layers and then use a serrated knife.

Bake in a preheated 350 degree oven 45 – 50 minutes, or until the pita turns a rich golden brown. Allow the pita to cool slightly before cutting and serving.