A Greek classic, this one-pot meal can also be made with kid. Be sure to include bones since they are a traditional part of this dish. The tangy egg-lemon sauce is the crowning touch, and is added just before serving. 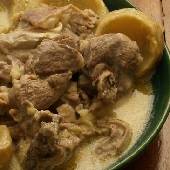 To prepare fresh artichokes: Remove the coarse outer leaves and stem. Cut off the top (down to just above the choke) and scoop out the choke with a spoon. Trim off remaining leaves around the sides to leave just the pale colored heart.

Rub the artichoke hearts with lemon as soon as each is cleaned and place immediately in a bowl of cold water with the juice of 2 lemons (to prevent them from turning black) and set aside until ready to use. Salt before cooking.

Make avgolemono sauce: In a mixing bowl, whip the egg whites to the soft peak stage. Still using the high setting, beat in the egg yolks until frothy, then beat in the juice of 3 lemons, 1 tablespoon at a time, making sure it’s well melded after each addition. The mixture will be rich and foamy. Reduce mixer speed to medium and add 5 soup ladles of the meat broth, one at a time, making sure each mixes in well before adding the next. Slowly pour the egg-lemon mixture into the pot, and shake to distribute evenly (do not stir).

If using kid: Reduce cooking time for the meat to 15 minutes.