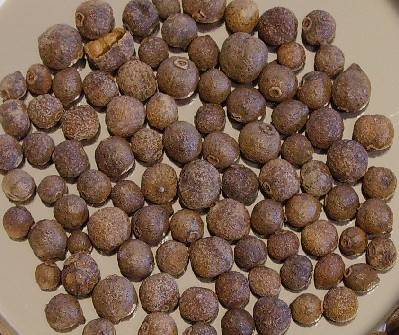 Both powdered allspice and the dried berries have a dark, reddish-brown color.

In Greek cooking, allspice is used in stews, tomato sauces for pasta, red sauces, and marinades for game, meats, and fish. Whole dried berry is an essential ingredient in pickling spices and is often used in preparing meats and fish. Use sparingly; the taste can become overwhelming.

Allspice (Pimenta dioica) was discovered by Christopher Columbus on the island of Jamaica during his second voyage to the New World, and named by Dr. Diego Chanca. It was introduced into European and Mediterranean cuisines in the 1500s.The “Jamaica pepper” – another name for allspice – continues to be grown primarily in Jamaica, though a few other Central American countries produce allspice in comparatively small quantities. The allspice “tree” is similar to the bay laurel in size, form, and function – both are classified as evergreen shrubs which reach of height of between 32 and 60 feet, both are dioecious (with male and female flowers on separate plants), fresh leaves are used in cooking as an infused flavor (the leaves are removed from the food prior to serving).In countries where allspice is a local crop, its leaves and wood are used to smoke meats and sausage. If you’ve ever tasted meat or vegetables flavored with “Caribbean jerk seasoning,” you’ve tasted allspice (in combination with other minor spices). When first introduced in England, the British palate discerned a combination of several spices – cloves, pepper, cinnamon/nutmeg – when served food seasoned with allspice; hence, they originated the popular name “allspice” for Doctor Chanca’s “Pimenta dioica” (allspice berries resemble peppercorns in shape; “pimienta”, Spanish word for pepper).
Tweet

Roasted Leg of Lamb with Wine, Garlic, Allspice, and Cheese(Peloponnesos)