These delightful appetizers are a delicious combination of ham and cheese, rolled up in phyllo and dipped in grated cheese before frying. In Greek, they’re called floyeres (flutes) because of the shape. 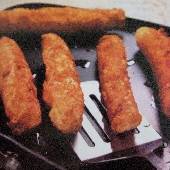 Place the grated cheese in a shallow bowl.

Place one piece of ham and a piece of cheese at one end of the phyllo strip and roll up. Twist the ends slightly and tuck under. Continue until all ham and cheese has been used, keeping prepared “flutes” well covered with plastic wrap.

Whisk together the egg whites and water.

Dip the flutes into the egg whites and roll in grated cheese. Fry quickly in very hot oil – enough so that they don’t stick on the bottom of the pan – until golden.

Make Ahead: Flutes can be formed in the phyllo a few days ahead, and kept covered (airtight) in the refrigerator. Dip in egg whites and grated cheese and fry just before serving.

Don’t like ham? Leave it out, and use just the cheese filling.