This is one Peloponnesian version of a traditional Christmas cookie. The region’s telltale ingredient, olive oil, replaces butter in this recipe. Sometimes, Greek cooks will do that—replace butter with oil, that is—to transform a sweet into something permissable for fasting. In the Peloponnesos, though, the use of olive oil is the norm rather than the exception. 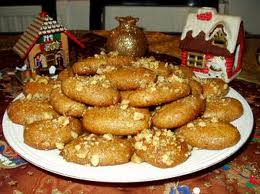