This dish is a quick and steadfast country dinner in many parts of Greece. I include it here, in the foods of the Peloponnesos, because it was mentioned by every local cook I spoke with, leading me to realize that even if the dish isn’t unique to the region, it is so commonly cooked that it is considered a local specialty. I was told, too, that the best noodles are homemade and served with ewe’s milk butter. Now there’s a novel idea for some American entrepreneur. 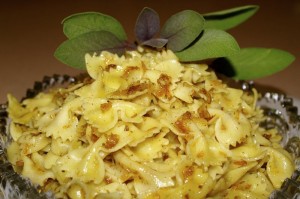 1. Bring a large pot of salted water to a rolling boil and cook the egg noodles until well done.

2. Just before the noodles are drained, melt the butter in a skillet over low heat until the butter bubbles up and browns. Timing is the secret to this very simple dish. Drain the noodles very well.

3. Spread a third of the drained noodles on a large serving platter and sprinkle with a third of the cheese. Pour a third of the melted butter on top. Add a second layer of noodles, cheese, and butter and then the final third. Serve immediately.