Some people say that Retsina, the resinated wine produced in Greece since ancient times, is an acquired taste. I’ll agree – I acquired it immediately. Not everyone agrees – the Epicurious Dictionary describes the flavor as “sappy and turpentinelike”. But cooking expert Sheila Lukinsbreaks ranks and calls it the “quintessential Mediterranean wine”, applauding it as an accompaniment for all types of Mediterranean cuisine. Like most Greek beverages, such asouzo, it is undeniably at its best when combined with Greek foods, especially the savory mezedes served as appetizers. Try retsina in its native environment and you may well respond to it like a true Greek yourself. 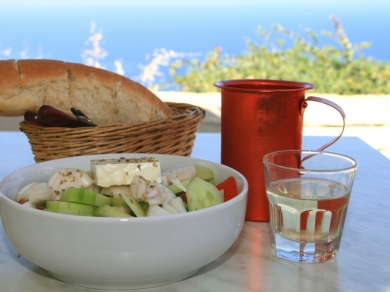 Retsina was born of the need to preserve and ship wines in pine-pitch sealed vessels. Ancient wines varied substantially in quality and tended to spoil. In efforts to avoid this, wines were often adulterated with exotic ingredients, from herbs to sea water. Due to the pine oils, Retsina was thought of as wood nymph tears, though how it was collected from those shy nymphs is not recorded.

Gaia Vineyards is one of a handful of Greek companies attempting to increase the quality of retsina, and to improve its reception overseas. Their Ritinitis Nobilis is an effort to grant retsina the respect of winelovers. However, a name change might boost sales -be reassured that the only effect this wine will have on your vision is if you drink far too much of it.

In recent years, it seems like many of the retsinas are less resinous than they were, as both young Greeks and tourists turn away from the strong pine flavor. Generally, the more traditional-looking the label, the stronger the pine flavor will be. If something looks trendy or designed for export, it may not be as strong.

Some feel that Boutari’s Santorini wine carries a resinous flavor, though that may be a trait from the highly volcanic soil and slightly vaporous air on the island. By the way, Santorini is filled with truly great Retsina spots. Try any of the cliffhanging taverns in Fira or, for a splurge, enjoy The Pyramid restaurant, particularly at sunset. A last-chance spot is the pleasant seaside tavern by the quay where the cablecar deposits passengers. For cruise ship passengers, it’s a last sip of Santorini magic before piling onto the tender for the return trip to the mother ship.

An outstanding resource for understanding and appreciating Greek wine is Nico Manessis’ The Greek Wine Guide, a beautifully illustrated, comprehensive volume on the many wines of Greece.

Never miss an opportunity to enjoy the wines of Greece during your travels, and at home. As they say on Crete, Yamas!

Greek Coffees,Teas,Spirits and Other Drinks