This recipe calls for Halloumi, a fabulous cheese from Cyprus, and one often used

in Greek cooking. If you can’t find Halloumi, mozzarella (often recommended as a substitute) has a similar uncooked texture, but less salt, less flavor, and will melt. Feta cheese will soften (not melt), and will change the taste of the dish slightly, but it is better choice.

This dish is easy to make, and delicious. Serve with noodles (spaghetti, linguine) or rice. 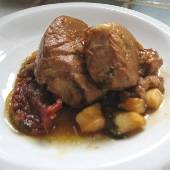 Heat the oil over medium heat. Add pork and garlic and sauté until the meat is lightly browned on all sides. Add tomatoes and cook until hot, stirring frequently.

Add water, salt, pepper, rosemary, and parsley, and stir to combine. When it comes to a boil, cover, reduce heat, and simmer for 1 hour. 5-6 minutes before done, add cheese and lemon juice, and shake the pot gently to distribute.

Turn off heat and let sit for 10 minutes, covered. [blockquote shade=grur]Guide’s Response to User Reviews
“Thanks to reviewer kaynor, who is correct about mozzarella being a poor substitute in this recipe. Although the uncooked texture is similar to halloumi, it doesn’t offer anything to this dish and I have amended the introduction to include a better choice as a substitute: feta cheese; however, since halloumi can be found at larger grocery chains, do try to find it to create the best result. Whether you add salt during cooking or on the table when serving, I recommend sea salt which has a more subtle flavor and was used in the original recipe.” –Nancy Gaifyllia, Your Guide to Greek Food