Oregano is sold fresh and dried as cuttings of flower tops and leaves packaged in disposable containers or as dried, ground leaves packaged in sprinkle-pour bottles.Caution: Not all oreganos are equal. Greek oregano (rigani) is a subspecies with the latin name Origanum vulgare (previously Origanum heracleoticum or Oreganum heraclites). Look at oregano package labeling to identify it. 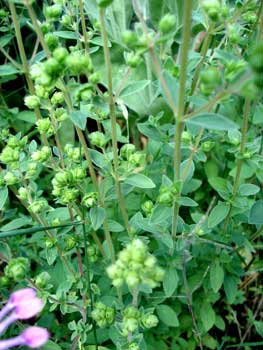 Greek Oregano, in bloom, reaches a height of almost two feet. Like all culinary oreganos, its flower is white. Its leaves are coarse, oval, and fuzzy. Leaves are about 5/8 inch long; they are dark green when fresh and light green when dried.

In Greek cooking, oregano is used in tomato sauces, with meats, fish, cheese, egg dishes, salads, cheeses, and with vegetables including tomatoes, zucchini, and green beans. It is also used to prepare a tea that is believed to be a treatment for indigestion, coughs, and to stimulate menstruation.

Today, several varieties of oregano are grown in many different parts of the world, from seeds planted in light, dry, and well-drained soils. Historically, as the name implies, Greek oregano originates on the mountain slopes of Greece. It continues to be an important erosion-control plant: its roots reduce soil erosion on mountain slopes. Greek hillsides covered with summer’s growth of wild oregano in bloom are a fantastic excursion for eyes, feet, and nose!The name “oregano” means “joy of the mountain” and has its origins in the ancient Greek “oros” (mountain) and “ganos” (joy).According to Greek mythology, the sweet, spicy scent of oregano was created by the goddess Aphrodite as a symbol of happiness. In ancient Greece, bridal couples were crowned with garlands of oregano. Oregano plants were placed on tombs to give peace to departed spirits. It was also used as a laxative because of its cathartic effect.Oregano’s power to heal has been known for centuries. It has powerful bacteria and fungi killing properties. It is used as a painkiller and anti-inflammatory. Oregano tea is a treatment for indigestion, coughs, and to stimulate menstruation. The oil of oregano is used for toothache, and in some cosmetics. The leaves and flowering stems are natural antiseptics because of high thymol content.Latin names for some of the oregano subspecies: