Some interesting Octopus Facts, from what the name really means to why they hang them!

You may have been to Greece and seen tavernas or even homes with rows of string hung with octopus hanging out in the sun.

Why do they hang their octopus in Greece? I can hear you ask.

Well, there is always a good reason and normally in Greece, it’s to do with great tasting food! 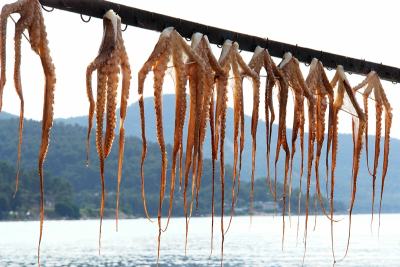 They hang them up in the air and in the sun so they dry out. After tenderising the octopus, it can be used in any recipe, but if they plan to barbecue it, the octapodi is best if it has been dried. They will leave it out to dry in the sun for at least a day before cooking it.

Grilling them over hot coals on a barbecue produces a delicious, tender, melt in the mouth dish, and the aroma of fresh seafood sizzling on the grill will have your mouth watering in anticipation!

This method of drying is one that has been used for centuries, when they discovered that it was better to dry them before grilling the xtapodi, but had nowhere to place them to dry them out, except their lines. Fishermen probably hung them over the ships ropes to dry out.

Having such a strong sun during the summer in Greece, it was the easiest and cheapest method. They would leave it out to dry all day, then that evening they would cook the oktapodi and family and neighbours would appear as the aroma of sizzling xtapodi drifted down the street.

The best way to grill octopus is on a hot charcoal barbecue!

A little bit of oktapodi information for you.
Octopus comes from the Greek word Octopodi.
Octo in Greek is eight.
Podi means leg. It has 8 legs!
As with many Greek words, the word itself actually describes the subject!

Have you been to Greece and seen fishermen beating the living daylights out of an octopus against a rock.
No, they’re not having a bad day and taking out their anger on a helpless creature!
The facts are, by doing this action – there are actually 3 steps involved, they are tenderising the oktapodi to make it very tender and soft when cooked.
Read this page to learn what is involved in treating the octopus!

How to tenderise Octopus for Cooking