Description:
There is taken, upon the name of God the Most High, of honey scorched in naqrah (perhaps this word means ‘a silver vessel’), three ratls, pounded scorched oven bread, ten loaves; starch, half a ratl; roasted anise, fennel and nigelia, two uqiyahs of each; Byzantine saffron, an uqiya; celery seed, an uqiyah; Syrian Carob, half a ratl; fifty peeled walnuts, as much as half a ratl; split quinces, five; salt, half makkauk dissolved in honey; thirty ratls water; and the rest of the ingredients are thrown in it, and it is boiled on a slow flame until a third of the water is absorbed. Then it is strained well in a clean nosebag of hair. It is taken up in a greased glass or pottery vessel with a narrow top. A little lemon from Takranjiya (? Sina’ah 51 has Bakr Fahr) is thrown on it, and if it suits that a little water is thrown on the dough and it is boiled upon it and strained, it would be a second (infusion). The weights and measurements that are given are Antiochan and Zahiri [as] in Mayyafariqin.

The following quantities are for 1/32 of the above recipe. The first time I used more bread and the mixture was too thick. I have not discovered what a mukkuk is, so the salt is pure guesswork. 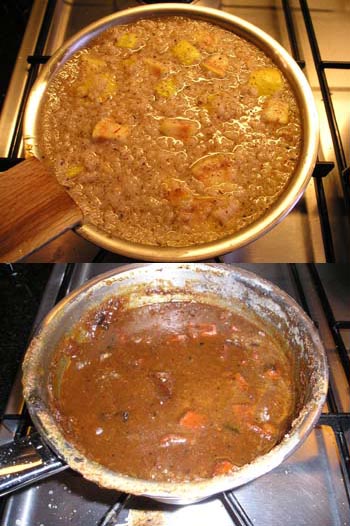