Sun-dried tomatoes can be pretty pricey at the market, but they’re easy to make at home. The way they are made in many traditional Greek homes takes some time, but the result is fabulous. Don’t use big meaty tomatoes for this process – instead, look for clusters of smaller tomatoes (your choice of variety) that are ripe and have that wonderful tomato smell. 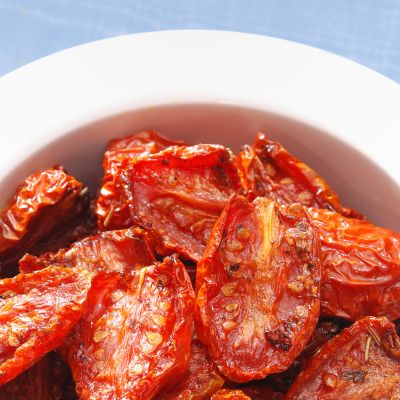 For every 5 pounds of tomatoes, use 1 cup of salt.

Wash tomatoes and cut in half. Lay halves, cut side up, in a single layer on large trays or tables and sprinkle liberally with coarse sea salt. Cover with tulle, raised so it doesn’t touch the tomatoes, to prevent bugs and debris from getting onto the tomatoes.

Place trays or tables outdoors in direct sunlight for 20-22 days, until completely dried.

Serving suggestions: Sun-dried tomatoes can be served as a meze, as a garnish and condiment, and are used in many types of recipes.