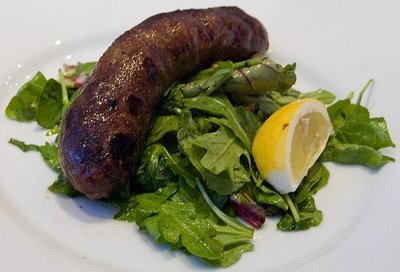 – Note:
– Shinos is a small bush growing in the wild in the Mediterranean, very aromatic and it produces seeds like peppercorns, aromatic and a little chilli.
– These little peppercorns like seeds are being used by some people in Cyprus in their homemade sausages.
– Shinos seeds are a wild grown herb, called up in the Original Traditional Cypriot Recipe for making Kypriaka Loukanika (Cyprus Smoked Sausages) but are not essential to be used.

– Place the coriander seeds in a baking pan and roast them for a few minutes in the oven and crash them.
– Mix the minced meat with the salt and crashed coriander and place in a strainer and strain for about 10 hours or overnight.
– The following day place the minced meat mixture in a large enough container, (bowl, pot or pail) and pour enough wine to cover it.
– Stir daily and add 1 cup of fresh wine each day for 5 days.
– The fourth day of soaking the meat mixture in the wine, wash the intestines under plenty of running water, rub with lemon and place in a bowl and top with wine to soak.
– The next day remove 3 cups of wine from the minced meat mixture and add 3 cups of fresh wine.
– Add 3 tsp of crushed coriander, 1 1/2 tsp of black pepper, flakes of red hot pepper (Optional) and 6 tsp (Optional) of (Shinos).
– Cut the intestines at the length of approximately 1.5 m long.
– Place one end on a funnel with a large hole and start stuffing until you stuff it half way.
– Tie a knot on the filled site, place the funnel on the other end and pierce the intestine with a needle to drain the wine during stuffing.
– Stuff the other end of the intestine, pushing the stuffing so the intestine is well filled.
– Tie a knot on the filled side, find the center of the filled sausage and at approximately 6 inches press the filling, leaving just the intestine cross the two pieces and bring one end though the loop, repeating every 6 inches.
– When you have competed the process pierce with a needle to drain the wine.
– Fill in the rest of the intestines using the same process until all the filing is used.
– Smoke the sausages for 1 day over aromatic branches of Shinos.
– If the sausages are not going to be smoked, they can be dried hanging in the sun for about 15 days.
– After drying, place in airtight sealed bags and store in the refrigerator.
– In the old days in the Cyprus villages, before the refrigerators were introduced, people used to store the sausages in lard (melted pork fat) in special clay containers called “Koumnes”.
– Some people still use this method using the lard to fry the sausages.