This can also be made with other orange squash. This is a variation of a recipe from Ileia, a province on the west coast of the Peloponnese peninsula of Greece. 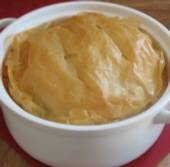 The day before: If using fresh pumpkin, grate coarsely and boil for 20 minutes. Let drain overnight and press to remove excess liquid before using.

Sauté the pumpkin in the olive oil for 5-10 minutes, stirring so it doesn’t stick to the pan. Remove from the heat, and transfer to a metal or pyrex bowl. Stir in the honey, breadcrumbs, crushed walnuts, and cinnamon, Stir well with a wooden spoon until thoroughly blended and smooth.

Lightly oil a 15 X 13 baking pan and line with 8-9 sheets of phyllo, brushing each with oil. Spoon in the pumpkin mixture and spread evenly. Fold the phyllo that extends out of the sides in over the mixture. Lay the remaining phyllo sheets on top, brushing each with oil, and trim off the edges that extend outside the pan with a scissors. Score the top phyllo sheets with a sharp knife into squares or large diamonds. Wet your hands with water and shake them over the top to sprinkle with water.

Bake for approximately 45 minutes. Remove from the oven, set the pan on a rack and cool until the bottom of the pan is cool to the touch (about 2-3 hours).

When the pita has cooled, boil the honey, sugar, and water for 5 minutes and pour the hot syrup over the cooled pie.

Allow the pita to absorb the syrup until it cools to room temperature.

Alternative preparation: I like to make this in two or three small round bakers (see photo), using half or a third of the phyllo and filling for each. They make lovely table-ready sweets and gifts.