It may sound like a no-brainer but boiling water to make various dishes isn’t always as simple as it may seem. Here are tips to make sure that boiling water is perfect for that Greek recipe you’re planning to cook. 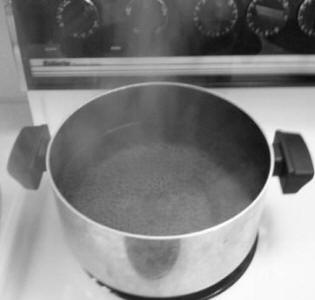 Although water boils at 212°F and only then is it a “real” boil, in Greek cooking we use the term “slow boil” as well.

“Simmer” isn’t a boil at all, although it is sometimes called a “gentle boil.” In Greek cooking, it is reached by boiling first, then reducing the heat to the stage where small bubbles can still be seen, usually over low heat.

Do bubbles mean boiling? No. Boiling (for water) means reaching a temperature of 212°F and steaming. Bubbles can form well before (as low as 160°F).

Don’t be deceived by pots that get hot very quickly around the sides and start to show little bubbles just around the edges. This doesn’t fit into any part of boiling; rather, it’s just the pot saying, “My sides are getting good and hot. Don’t touch.”

Water can be brought to a boil quickly over high heat, or slowly over medium heat. In Greek cooking, the water starts out cold, and the general rule of thumb is that if there is no food in the water, go for the high heat and get it to the boiling point as quickly as possible. If there is food in the water (eggs, some vegetables, etc.), bring it to a boil over lower heat. Check recipes for guidance.

How much water? That general rule says one quart of water for each 1/4 pound of pasta. Making a pound of pasta? Up the water to 6 quarts. Not enough water leads to gummy pasta.

How much salt? The general rule is 1 2/3 teaspoons of salt (kosher sea salt is best) for each quart of water. Add the salt after the water comes to a full boil.

Adding salt may reduce the speed of the boil. Wait until water reaches full boil again before adding pasta.

Why add salt to boiling water for pasta? It’s a matter of taste and recipe. If the recipe calls for it, there’s usually a reason. If you’re watching your sodium intake, don’t add it and adjust seasonings later in the recipe.

Boiling water for eggs: This is one of the biggest surprises to those who grew up boiling eggs for 3 minutes for soft, 5 for medium, and 10 for hard.

To make perfect boiled eggs, place in a single layer in a pot with cold water (at least an inch over the eggs). Cover and bring to a full boil over medium heat. As soon as the water reaches full boil, remove the pot from the heat and let sit until done… which depends on the size of the egg, but generally 2-3 minutes for soft-boiled, 15-18 minutes for hard-boiled.

Muhallebi me nero (Water Base Pudding)