Guinea fowl in the Ionian region might have an interesting history—or, at the least, an interesting etymology, if one is to believe historian Waverley Root. The Zakynthians call it frangokota, or “French chicken,” while in Corfu it is called faraona, after the Italian gallina faraona, or pharaoh’s turkey. Root says that the bird, indeed a native of Guinea in West Africa, was known to the Greeks as early as 500 B.C. They were buying it via Egypt, which might account for its Corfiote name. It slipped into obscurity after the fall of the Roman Empire and resurfaced again in Europe sometime in the 16th century when the merchants of Portugal, then in charge of Guinea, began selling them to France, which explains why Zakynthians refer to the delicious but tough-fleshed bird as
“French.” Maybe it’s a bit far-fetched, but Root is always fun to read. In any event, this dish is little more than a simple, hearty red stew for which themysterious bird is favored among islanders. Indicative of the heartiness of Zakynthian cooking, chunks of local cheese are tossed into the pot a few minutes
before serving. 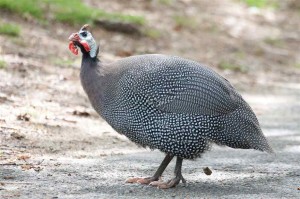 1. Heat the olive oil in a large, heavy skillet over medium heat and cook the onions and garlic, stirring, and season with salt. Simmer over medium-low heat, covered, until the sauce begins to thicken, about 20 minutes. Add the vinegar and simmer for another 5 minutes.
2. Preheat the oven to 350°F. Season the guinea hens with salt and pepper. Place them in a deep clay or ovenproof ceramic baking dish and pour the sauce over and around the birds. Add enough water so that the sauce comes a third of the way up the birds. Bake until the hens are tender, 45 to 55 minutes, basting the birds with the sauce every 10 minutes. Ten minutes before removing from the oven, stir the cubes of cheese into the dish. The cheese should be in oozing chunks when the dish is served. Serve hot, accompanied by mashed potatoes or, better still, Polenta from Lefkada.