The most commonly used fennel leaves in Greek cooking are fresh, sold in bunches or attached to the root. It is sometimes sold under the name “anise” because of the similarity in tastes, but anise and fennel are different. Dried fennel leaves, flowers, and seeds are also available, packaged in a variety of containers. 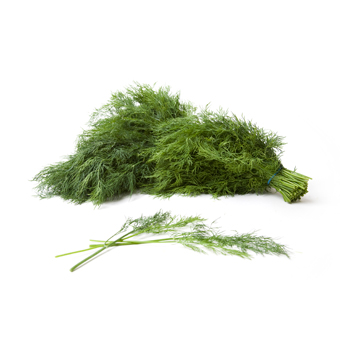 Fennel leaves look a lot like fresh dill. The stalks have small feathery dark green leaves. Fennel is a perennial herb native to the Mediterranean region, and grows in the wild in most temperate climate regions. Fennel has a definite anise (or licorice) flavor.

Fennel leaves are widely used in Greek cooking both as an herb and as a green. Large quantities are added to stews and ragouts, as well as fricassee dishes and fritters. Fennel is generally used to flavor meat, seafood, and vegetable dishes, and is also an ingredient in delicious savory pies (pites).

Two Internet references for suggest that

Fennel is an excellent addition to a kitchen or herb garden. Beware: many other herbs and flowers do not like to be planted too closely to fennel.