Thiples—sometimes called xerotygana—are not unique to the Peloponnesos, but they are very much a part of the region’s culinary life. “A wedding without thiples would be like a wedding without a bride,” one woman told me. While the sweet is made all over Greece, it is shaped differently from place to place. In Crete, for example, strips of dough about 2 feet long are twirled into decorative coils as they fry in hot oil; elsewhere thiples are shaped like bows or left to take their own amorphous shape as the dough hits the hot oil. In the Peloponnesos thiples are folded and large—as big as wallets. They are the dessert of joy throughout the region, served not only at marriages but also at baptisms and on holidays. Their name comes from the Greek for “to double,” in reference both to the way they are folded and to the wish that all good things should last long—“twice as long.” 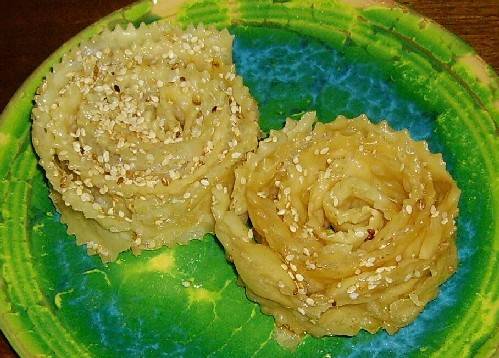 1. Combine 7 cups of the flour and the baking soda in a large bowl.

2. Beat the egg yolks with the vanilla in a bowl until creamy and pale. In a large bowl, beat the whites until stiff peaks form. Fold the yolks into the whites and slowly add the flour mixture, folding vigorously until a dough mass begins to form. Moisten the palms of your hands with olive oil and knead the dough until it is smooth and firm, adding more flour if necessary.

3. Divide the dough into 6 or 8 balls and on a lightly floured work surface roll out each ball to a large, very thin sheet. Using a pizza cutter, cut the dough into large strips, about 6 inches wide and 8 inches long.

4. Heat about 6 inches of olive or vegetable oil in a large, heavy pot over medium-high heat. When the oil is very hot, deep-fry the thiples, one or two at a time, for a few seconds, until they puff up and are light and pale gold. As they fry, try to fold them like a flat s, using two long forks and gathering up the ends of each piece of dough as it fries. Remove with a slotted spoon and drain on paper towels. When cool, drizzle with honey and sprinkle with chopped nuts and cinnamon. Serve warm or at room temperature.