Greek Coffee is a strong brew, mostly served with foam on top as the coffee itself produces a creamy affect when brewed. As the coffee is not filtered in any way, the coffee grounds remain at the bottom of the cup. Although it can be made in a different pot, the traditional small pot is best because it creates the correct amount of foam, which adds to the unique taste. When in Cyprus…  Generally 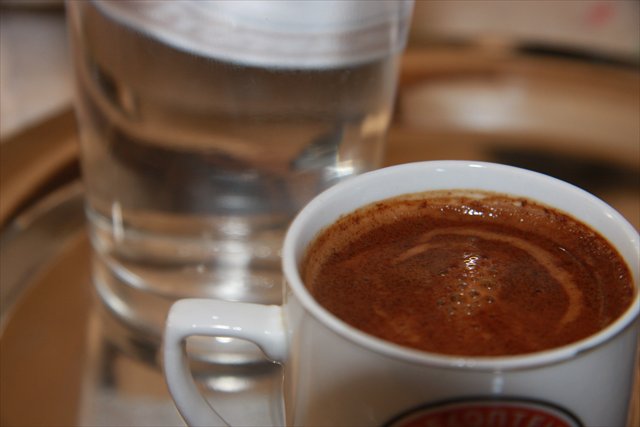 Cypriots drink coffee in two ways:
The traditional way is still prepared as it was when it was first discovered that the grains needed roasting in the mid 1400s.  This type is defined by the way the grains are squeezed, then the method of roasting the coffee. This special squeezing which is where the unique flavor to Cyprus Coffee, is a well kept professional secret. For all Greeks and Hellenic Cypriots, the roasting of the coffee is a ritual, an art form of precision and unique personal preference. The more recent type is served ice cold and is made by a special type of coffee, which comes as powder or as small grains. This type is served during the summer and has started to spread around Europe and the American continent carrying the name invented in Thessaloniki, Greece by Dimitrios Vakondios, ‘frappé’.

The activity of drinking the coffee, without exaggeration, can be described as a holy moment for all Greeks!

There are four main ways to have Cyprus Coffee:

Metrios (medium, usually with one small teaspoonful of sugar)

There are many more combinations of how the coffee is sweetened and cooked, to individual preference.

Making a Cyprus Coffee: Easy to cook! Difficult to master!

It is made and served to be drunk slowly. Always served with a glass of cold water. The specialised pot called an Mbriki.

-Do not fill the cup to the top, most Cyprus coffee drinkers like to poor a little water into the coffee themselves for various reasons.

– Once the coffee has been made, let it stand for one minute to allow the coffee grounds to settle at the bottom of the cup.

– When making coffee for more than one person, pour the coffee a little in each cup, to distribute the froth in all the cups. Then proceed and just fill them up.

How to Make Greek Coffee

How To Make Greek Frappé Coffee