Coriander seeds are available in sealed packs. Pour-and-shake containers of ground coriander are sometimes available, but it is recommended to buy the seeds and grind them yourself. 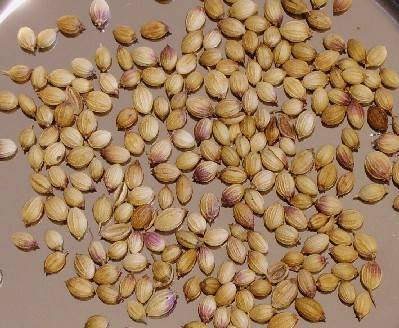 When these rounded seeds are crushed with a mortar and pestle, they give off a strong sweet smell somewhere between cinnamon, rose, orange, and clove.

In Greek cooking, coriander is used with pork, mushrooms, in chocolate for cakes, in stuffed cabbage, and although not widely used, is great in candy-making.

Coriander is the name of the seeds. The leaves are known as “cilantro.”

Coriander most likely originated in the Mediterranean and south Europe areas. Like many ancient spices, most modern-day botanists, herbologists, and archaeologists have realized that pinpointing an exact geographic location for a plant’s or tree’s origin is exceedingly difficult, if not impossible.Perhaps the earliest archaeological evidence of coriander was discovered in the Nahal Hemar cave in Israel, considered to be over 8,000 years old. Sanskrit texts discuss coriander’s cultivation in ancient India nearly 7,000 years ago. During the Hebrew Exodus, the exiles probably learned about coriander while in Egypt. Exodus 16:31: “And the house of Israel called the name there of Manna: and it was like coriander seed, white; and the taste of it was like wafers made with honey.”The ancient Hebrews used cilantro root as the bitter herb in the symbolic Passover meal. Coriander root was an ingredient in a love potion, an aphrodisiac, in China during the Han dynasty (207 BCE-200 ACE). Romans of antiquity used coriander with cumin and vinegar as a (rubbed into) meat preservative.

Coriander arrived in the U.S. around 1670 and was one of the first spices cultivated by early settlers.