Arugula, also known as rocket, is sold either loose-leaf or banded in bunches, in the green grocer section.

Arugula leaves are a rich, dark green color. It has a peppery, mustard-like flavor,is a rich source of iron, and is high in vitamins A and C. Arugula is also referred to as rucola, roquette and rocket. The 6- to 8-inch leaves look like radish and white oak leaves. but have a hint of red in the veins or fibrous stem channels. 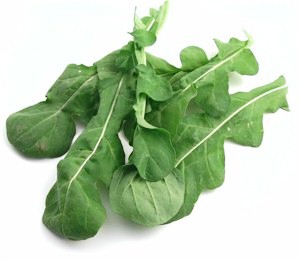 Arugula is a tasty addition to other salad greens, and goes well on sandwiches, in chicken and tuna salads, egg dishes, pasta and tomato dishes, and sautéd vegetables. It is commonly used on Clean Monday – the beginning of the Lenten period.

Southern European and Mediterranean in origin, arugula is now grown in most parts of the world. It is predominantly used in fresh green salads.Ancient Romans used the seeds to flavor olive oil, and according to the book “Cambridge World History of Food,” arugula seed combinations have been used as an ingredient in aphrodisiac concoctions dating back to the first century.
Tweet